The (r)evolution of cloud computing has been a significant focus in industry for the past decade, where organisations are often attracted to the possibility that cloud migration can lead to the benefits of cost savings and flexibility. While cloud benefits are clear, the best model and approach for migration can be less obvious, and organisations frequently waste time on debating this. While the chosen model and approach for a cloud migration is significant, the focus should rather be on optimisation.

Cloud optimisation is the process of correctly selecting and assigning the right resources to a workload or application, i.e. rightsizing. Organisations are often left feeling disappointed when they migrate their workloads to the public cloud because it does not live up to the efficiencies and savings that they have been promised. In some cases, costs even go up when compared to an on-premise alternative. This is mainly due to the lack of optimisation before beginning their cloud migration journey.

• Rehost (AKA lift-and-shift)
Essentially a forklift approach to migrating applications to the cloud, moving them without any code modification.

• Replatform
Code is not altered excessively, however, replatforming involves a bit of modification for the purpose of taking advantage of the new cloud infrastructure.

• Refactor
A more advanced process of rearchitecting and often recoding some portion of an existing application to take advantage of cloud-native frameworks and functionality.

Most existing workloads are overprovisioned, meaning that organisations are allocating more computer data storage space than is strictly necessary. Although choosing an approach is unavoidable, none of them would be effective when inundated with inessential data. Instead of leveraging cloud technologies and services to become more efficient, without optimisation and a proper cloud strategy, organisations will just migrate existing inefficiencies to a new location.

In cloud computing, you pay Infrastructure-as-a-Service providers on a monthly basis. But depending on how much computing power you use, your costs can vary wildly, which is often why organisations feel that remaining on-premise is the more cost-effective option. This can be avoided by establishing a baseline of resources needed in the cloud, turning off idle instances, and ensuring that servers aren’t running any unnecessary or bloated services.

There’s no one-size-fits-all transition for moving an application from your on-premises data centre to the cloud. It’s important to recognise which components are worth migrating and which would be better left unchanged. In order to ensure a pragmatic cloud migration, organisations ideally need to identify which components are low-effort, high-value optimisations. Every business’ process and cloud strategy is different, and the below diagram should only be used as an indication on how to categorise and prioritise these components. 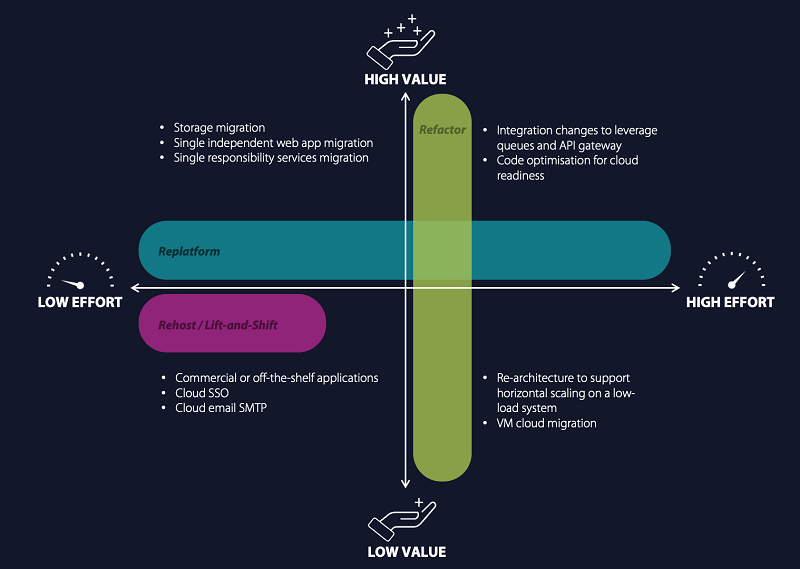 There are often components or modules that are relatively easily adapted to a cloud hosting configuration and will yield most benefits from a cloud migration. These should be a first priority during optimisation. At the other end, it’s important to recognise the high-effort, low-value components. Focusing on migrating these components will result in a waste of time, effort and money, without yielding any benefits the cloud provides.

Optimisation should be seen as an ongoing exercise, as organisations continuously migrate applications and systems. Costs can be easily be hidden and become lost as lists of components grow over time. Continued rightsizing, and a clear picture of where and why every service is being used is the only way to avoid overprovisioning.

Organisations are much more likely to see real value when they view migration as an opportunity to rationalise their computing and storage practices. A cloud migration presents an opportunity for spring cleaning, and taking the time to put together a migration strategy will be valuable in terms of cost, time and effort in the long run. When companies optimise their workloads, they can reap all these benefits of the public cloud and actually save time and money in the process.